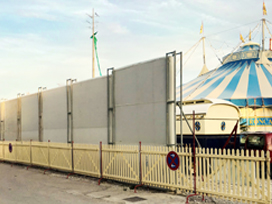 Clear the ring! Soundproofing project with Circus Roncalli in Munich

For the second time in a row, a project with the well-known Circus Roncalli has been realized, which had its guest appearances in Munich for several weeks. In order to keep the noise level for the residents during the (evening) performances low, a noise protection concept was developed. 25 CENO-WALL elements were used, which were staggered and set up at different intervals. The arrangement of loudspeakers, stage and caravans has been adjusted in order to provide optimal noise protection. Escape routes and fire service access had to be taken into account despite the limited space.
The project ran to the full satisfaction of all involved during the four-week period of operation.

Key data: 25 elements, 31 stands, anchoring with pegs and screwing to asphalt or facade, duration of use approx. 4 weeks